From Support to Development: Changing Roles at LearnUpon

LearnUpon is a company that values its team. As life moves on and goals change, we want to help our employees follow their ideal career paths and aspirations whenever we can.

One example of this in action is our Internal Systems Developer, Brendan Cregan. With LearnUpon for almost 4 years, he’s experienced a lot of changes since joining. Today, we wanted to share his story and give an insight into his transitioning role within the company.

Hey Brendan, let’s go back to the beginning, how did you start working at LearnUpon?

Well, after graduating with a development degree (I have a masters in software development), I ended up in the job marketplace in the middle of the recession. It was extremely hard to find a job as a developer in Ireland, particularly if you didn’t have previous work experience. So, I moved to Galway and took up an eLearning support role there. That decision was the first step on the road that led me to LearnUpon.

Afterward, I moved to Dublin for another technical role in an IT department. After working there for a year, I came across an ad for a support role in an eLearning startup in Dublin and it sounded really cool. It turned out to be LearnUpon.

I had several interviews with the team, including Brendan, Cathal, Shane, and Lisa, who are all still here. The role really appealed to me as it had a range of technical requirements. I could make use of my college education – using SQL, and tech like APIs, SAML, SF, etc. And, in general, I saw that the whole support team at LearnUpon were really knowledgeable from a technical perspective. 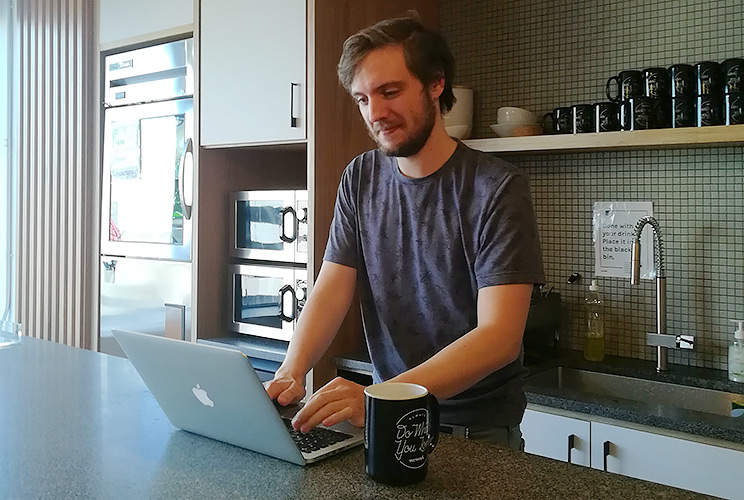 So, you were happy with your support role – then what happened?

I talked about this with our founders, Brendan and Des, and they helped me plan out  a potential move to a new role.

Some planning was needed around training and the initial workload. During this time it was a 50/50 role – half support and half development. What I found amazing was that everyone was super supportive in helping me out when I ran into any problems or needed help understanding something. Cathal, who’s Head of Infrastructure and Security, was my initial manager and he was very helpful in managing my work and assisting me with tasks.

Now, you work remotely. How did that happen and is this something you’ve always wanted?

Well, you know, remote work isn’t something I planned, but living in Canada was something that I always wanted to do. So, after two and a half years at LearnUpon, I decided it was time to move. I didn’t want to put it off any longer.
When I finally made the decision, considering that LearnUpon was still a smaller company, I wanted to give Brendan and Des as much notice as possible so they could find a replacement before I left. I emailed them about 8 months before I planned to leave. I didn’t have any expectations about keeping my job, but luckily, the guys were happy to let me work remotely. So here I am, in Vancouver, Canada, coding since January 2018.

What is your role currently like at LearnUpon and what are you up to now?

Right now, I’m focusing on internal projects with the Development team. It’s been a real challenge getting used to working with the app and new programming languages like Rails. There’s been a steep learning curve, but everyone has been really supportive in helping to get my skills up to speed. Now I’ve got the development role that I’ve always wanted and I’m having the time of my life.